I was looking for a white elephant gift, and the silliness of this animatronic Christmas tree was too hard to pass up. The humor wore off after the third time I heard it sing, so I decided to make it useful by adding Alexa.

For context, the tree originally played a song, and motors in its mouth and body made it sing and dance to the music. This is all the tree was designed to do:

The first step was to take the tree apart to see what components can be reused. Fortunately, this was relatively easy – aside from the short section of fabric I had to cut and two small blobs of hot glue used for strain relief, all of the components were held in place with screws.

See here for a full teardown.

Once I had the tree’s electronics enclosure out, I could start picking parts and building hardware to replace its original circuits. 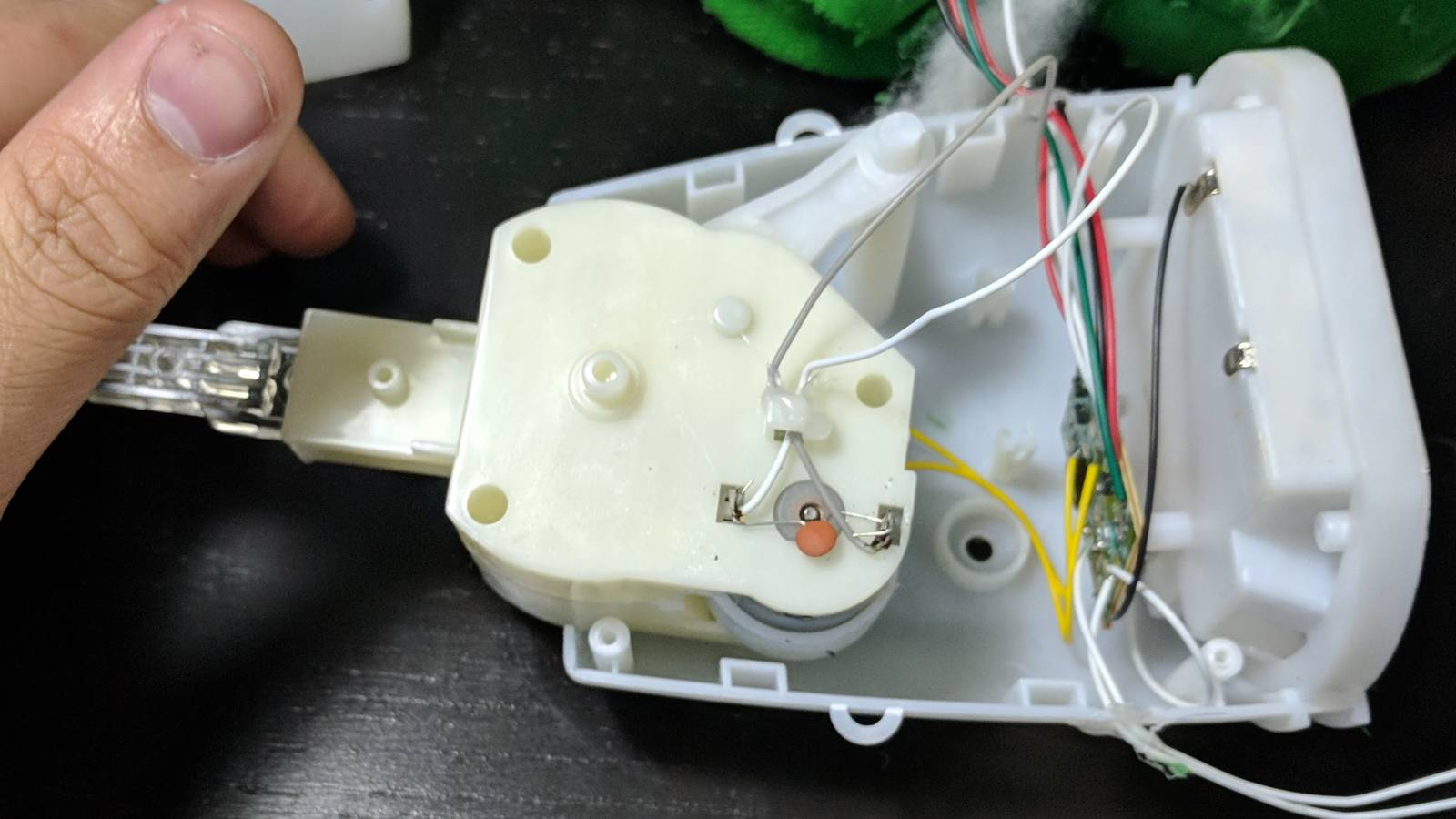 I had two main constraints for parts: they had to fit inside the enclosure for neatness, and I needed to be able to buy the parts in person to finish it on time for Christmas. While this meant that all of the Raspberry Pi HATs were out of the question, Vetco Electronics has an excellent selection of more generic parts near Seattle.

Here’s what I ended up using:

Prototyping on a breadboard

With the parts picked out, I needed to test the components on a breadboard. First, I removed the plastic case from the audio adapter using a spudger and soldered wires to the headphone and microphone contacts to make it more breadboard-friendly. Then I wired up the “great sounding” version of the amplifier circuit by following their schematic, and next to it I wired the two motor controllers using the datasheet and some experimentation. I omitted the volume potentiometer in the final circuit because there is one built in to the audio adapter. 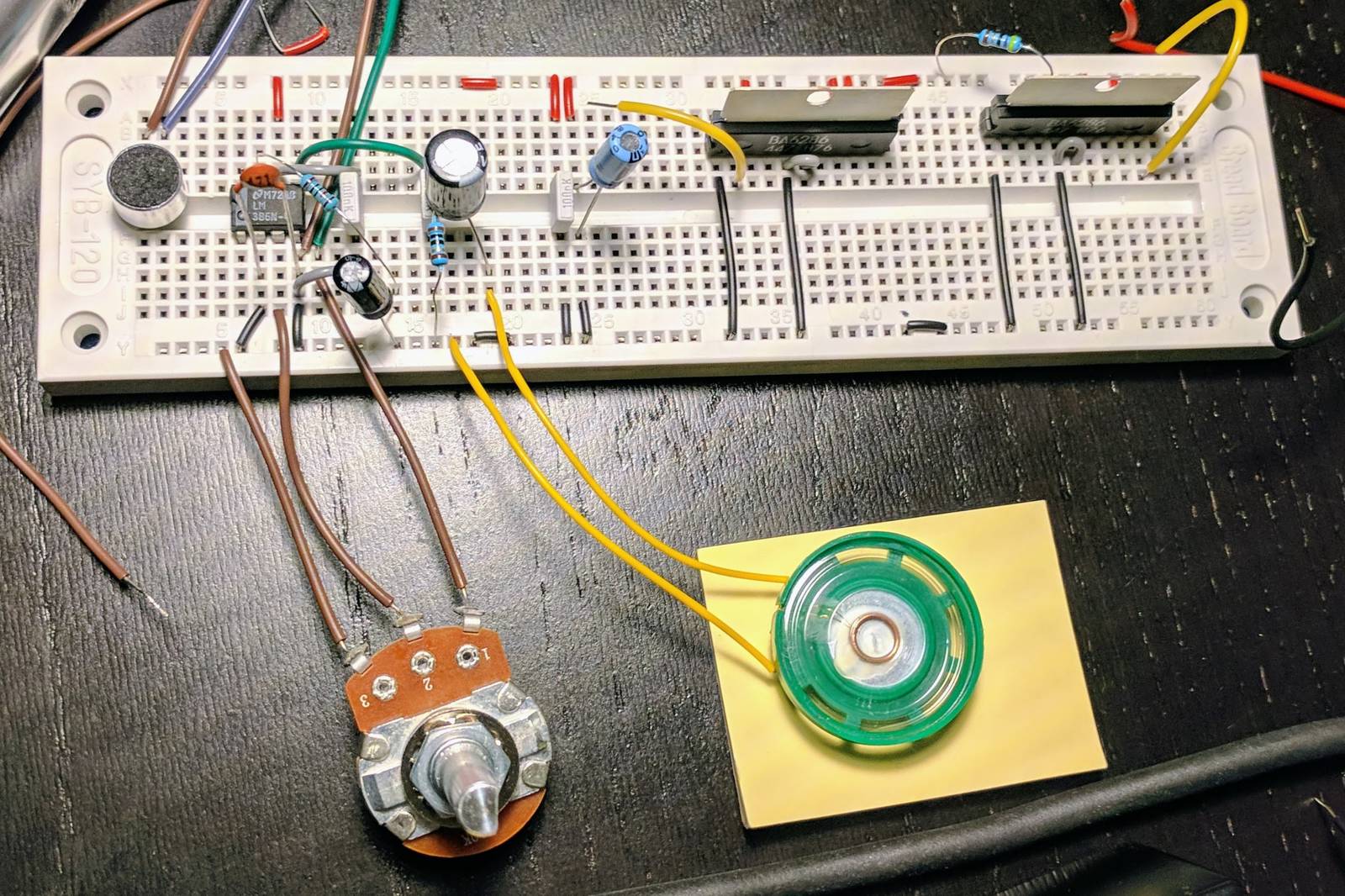 The wires leaving the audio circuit go to the audio adapter’s microphone in and headphone out.

The motor controller isolates the power supply to itself from the supply for the motor. While this is useful for high-power applications, the 5V USB supply is sufficient for the tree’s motors so I tied these pins together. The controller also has a pin to set the output current by connecting a resistor to 5V. On the breadboard, I used a potentiometer to determine the correct values. For the dancing motor, a 57 ohm resistor made the motor spin at the same speed as it did originally. The mouth needed the maximum current to stay open, so I just used a wire here. Before I soldered a connection from the logic input pins to the Pi, I measured the current through it by connecting an ammeter in series between each pin (pictured above as loose yellow wires connected to of the motor controllers) and a 3.3V supply. With the motor running, the current was on the order of microamps, which the Pi is able to drive without issues. Refer to the Raspberry Pi GPIO pinout when choosing pins.

Since I planned to make only one of these trees, I soldered the two circuits directly to a piece of perfboard. While this meant I didn’t have to design and etch a printed circuit board, that might have been preferable: manually routing connections was time consuming, making intentional solder blobs for connections was annoying, and the extra wire length added some noise to the amplifier circuit. In the end, though, I was able to get the circuits to fit on a single board about the size of the Pi itself. 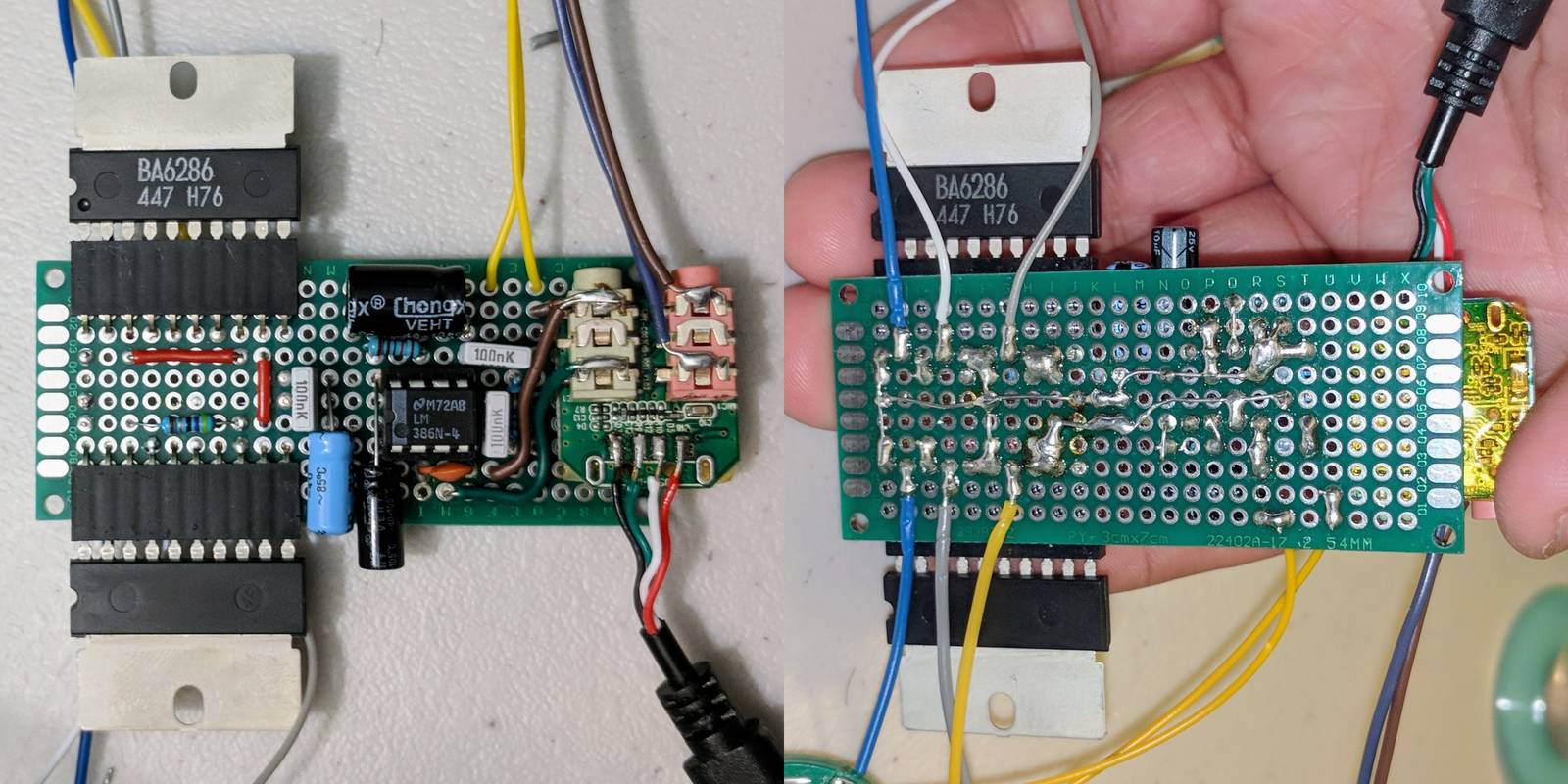 Because the bottom of the Pi and my circuits would be back-to-back, I insulated them with Kapton tape. Electrical tape probably would have been fine, but because the motor controllers got hot (but not burning) to the touch, I didn’t want to take any chances.

On the Pi, the red and black wires go to the 5V and ground “rails” on the perfboard. The white wires go to the switch, which works by tying GPIO pin 18 to ground when pushed. The blue wires go to the logic inputs of the motor controllers. The remaining wires are for the tree’s LEDs. I connected a resistor in series to limit the current through the LEDs to 20 mA. (The tree has another set of LEDs too, but I accidentally burned them out while probing the components to figure out how they were wired.) 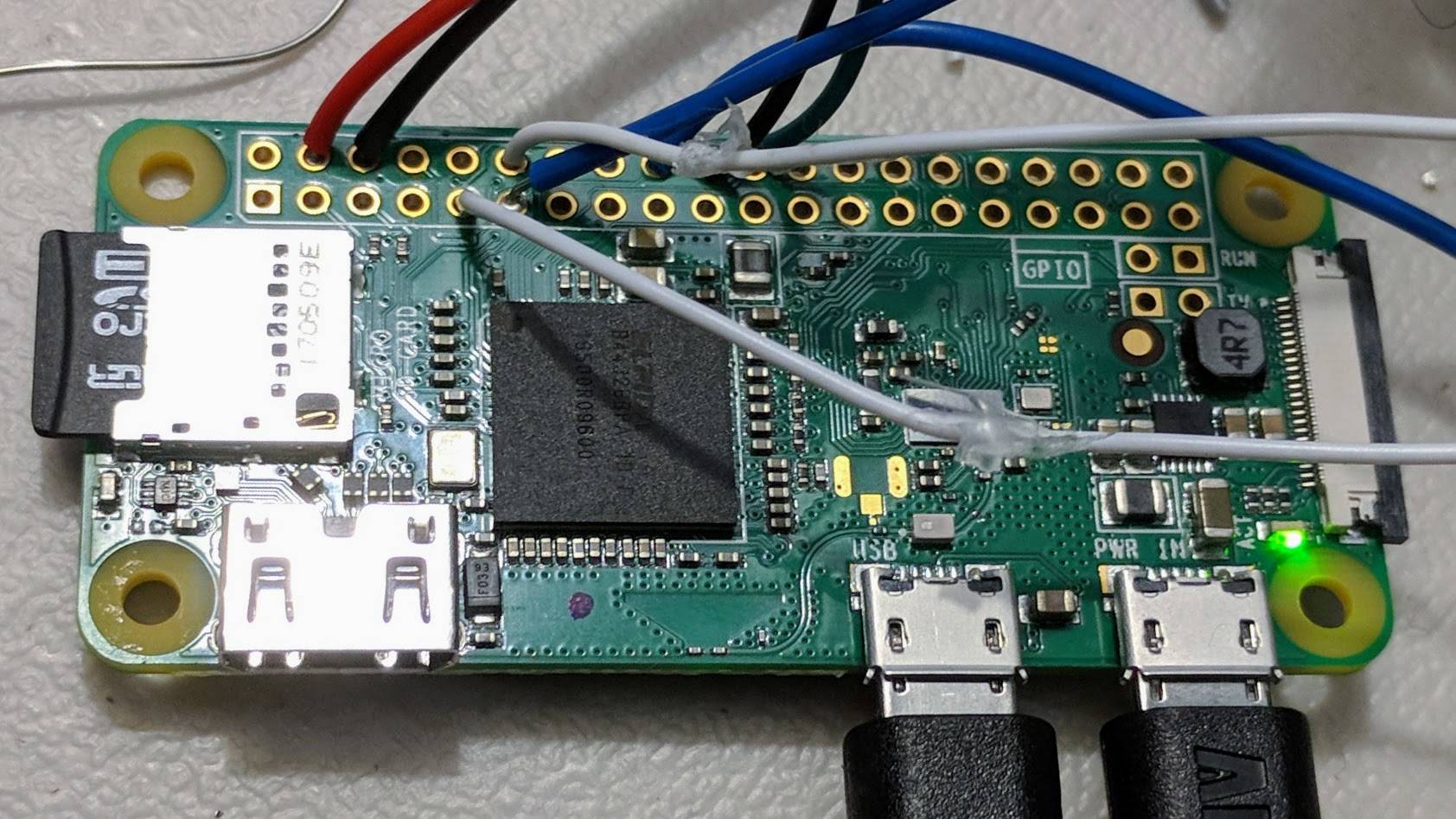 Conveniently, the enclosure had a hole in front that was the perfect size for the microphone.

Not so conveniently, my parts were still too big to fit in the enclosure. My solution was to cut off the battery bay and two screw terminals for some extra space, which also lets me access the SD card without disassembling the tree for installing Raspbian and Wi-Fi configuration. (When assembling the enclosure, make sure that the SD card slot is facing the bottom.) 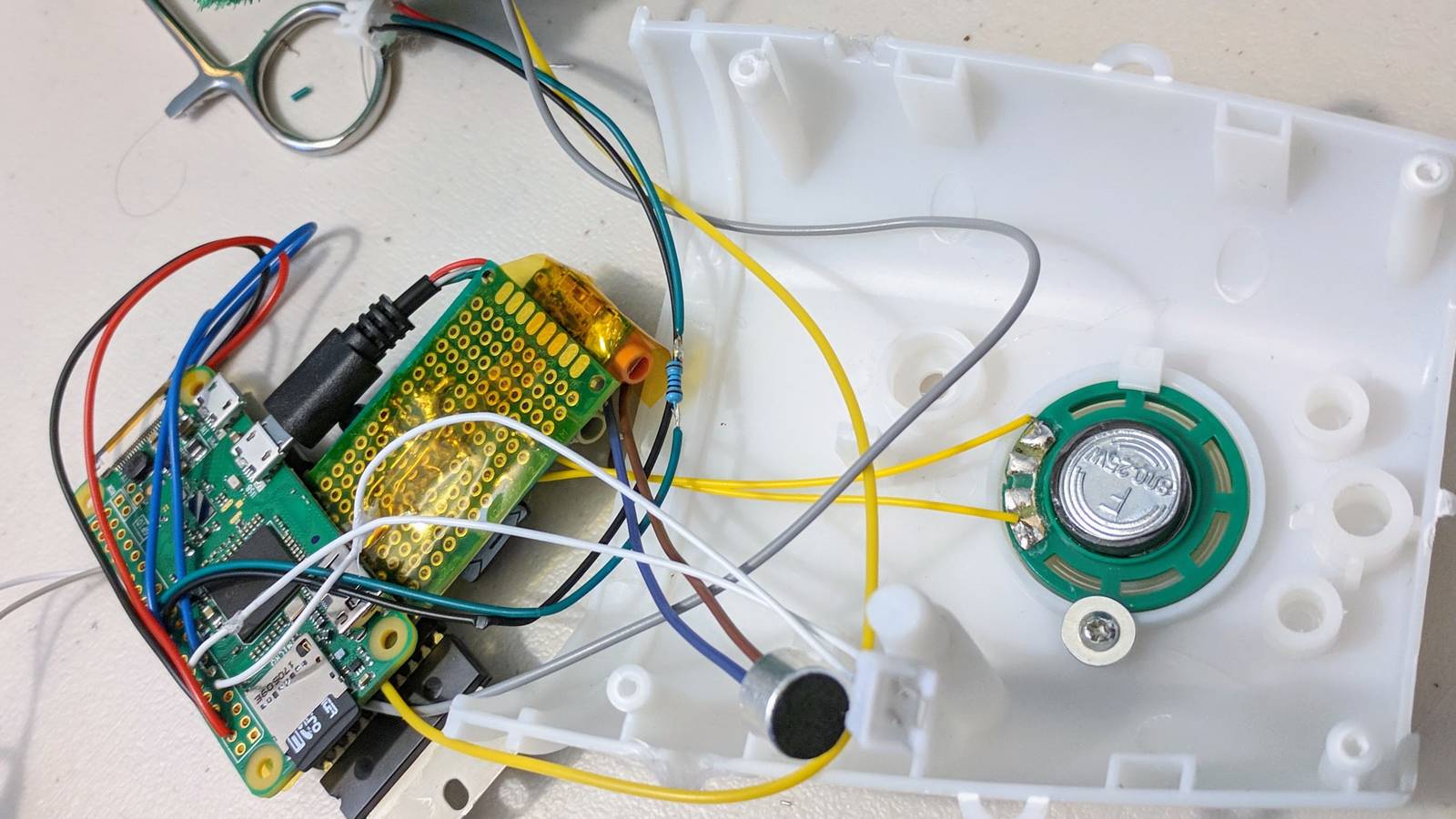 Before screwing the enclosure shut, I connected a micro USB cable to the Pi’s power input. Then I wrote down the GPIO pins the motors, button, and LEDs were connected to, and re-assembly was just the disassembly in reverse. I drilled a small hole in the battery cover for the USB cable before screwing it back on.

The Raspberry Pi is stuck inside the tree with no way to display anything, so a graphical interface would just be bloat. As a result, I used the Raspbian Stretch Lite image to start with. Download and install the image according to their instructions.

There is no keyboard, serial connection, or Ethernet port, so the next step is to set up Wi-Fi and SSH before booting up the Pi for the first time. In the SD card’s boot partition, create a basic wpa_supplicant.conf. You may have to remove and reinsert the SD card into your computer if the boot partition isn’t mounted after installing Raspbian.

Also in the boot partition, create an empty file named ssh to enable SSH. Unmount the SD card from your computer, put it in the tree’s Pi, and plug in the tree to your USB power supply. With this configuration, Raspbian will boot, connect to one of the specified Wi-Fi networks, and enable SSH with the default credentials.

Then, discover the Pi’s IP address using arp, nmap, or another tool according to this Stack Exchange post. With the IP address in hand, connect to the Pi using the default username “pi” and password “raspberry”. This is very insecure – once connected, change the password via passwd to prevent others on your network from accessing your Pi.

I also recommend these other steps for security hygiene:

I decided to use AlexaPi to actually call the Alexa Voice Service instead of Amazon’s reference app because AlexaPi lets you choose a wakeword engine, supports GPIO pins for triggers and status lights, and none of its components expire after 120 days.

Then, I needed to set up PulseAudio to run in system-wide mode. The AlexaPi project has some instructions that mostly worked for me. I opted to use the VLC handler, but audio input did not work out of the box. What worked for me was to manually specify the input device rather than use “pulse” in AlexaPi’s configuration. By default, this configuration is in /etc/opt/AlexaPi/config.yaml:

I also needed to configure ALSA to work with PulseAudio. Paste this into /etc/asound.conf:

At this point, you should be able to reboot your Pi and once Alexa says “Hello”, the tree will work as an Echo (albeit poorly). If not, check the log via journalctl -u AlexaPi.service to see what specifically went wrong. If you still need to set up the output device, I found the Arch Wiki’s documentation on PulseAudio useful.

While testing, I determined that Snowboy, a purpose-built hotword detector, was much more reliable than using the general-purpose speech recognizer CMUSphinx for this purpose. To enable this, in AlexaPi’s config.yaml, first disable the Sphinx recognizer and then enable Snowboy:

To test these changes quickly, you can restart just the AlexaPi service without restarting the entire Pi with sudo systemctl restart AlexaPi.service. The wakeword will still be “Alexa”, but it should be much more responsive.

Given that I just stuffed Alexa into a Christmas tree, I figured an appropriate wake phrase would be “Oh Christmas tree”. On Snowboy’s dashboard, you can train and download a new model for any phrase after creating an account. Alternately, you can just use my model, though it might not work very well for you because it’s trained only on my voice. You can also record some samples to improve my model on its page.

Once you have a model file, copy it to the Pi somewhere the alexapi account can access, like inside /opt/AlexaPi, using scp or a graphical tool like FileZilla. Then, edit AlexaPi’s configuration to use the model:

Finally, set up the GPIO pins to the pins so that they match the the pins you chose earlier for the motors, lights, and button. To test the mouth motor, I assigned its pin to the playback light. When testing, if the mouth moves but does not open, its motor is spinning in the wrong direction. Change the configuration to the mouth’s alternate pin to spin the motor in the other direction and the mouth should open for all of Alexa’s response.

My first thought was to patch AlexaPi to analyze the audio as it is being played. However, Amazon returns an MP3, and AlexaPi hands off playback responsibility to VLC. Decoding this again outside VLC just to control the motors seemed redundant.

PulseAudio provides pacat to redirect audio streams to files and vice versa, much like cat does for text. I used this to capture the system audio output in realtime with the RPi.GPIO Python library to control the motors in my script. Change the mouth pin and PulseAudio source to match your hardware, then run the script (ideally inside a tmux or screen session so that you can disconnect from the Pi) to enable natural mouth movements.